I’m currently implementing a cute idea I had: getting a trace of recently evaluated expressions from a program.

The insight is that if you have an error in say

it will crash when trying to take the head of the empty list, []. But the problem isn’t really with the head function here, it comes from the fact that the input value go 0 accidentally evaluates to [].

I.e.: the error is not in the consumer, but in the producer.

But GHC will complain with

and even with a stack trace it doesn’t really tell you much. To find the bug it would be more useful to know: what was evaluated right before the error occurred?

With Haskell Program Coverage (HPC), GHC allows us to track which expressions were evaluated during the course of the program: whenever an expression is evaluated, it bumps a number in an array (a “tick”). At the end of execution you can then read out how many times each expression was evaluated.

That doesn’t really help us here though, we might encounter the error after a long execution, but we want to know what happened immediately prior.

The idea is to extend HPC with a “trace” data structure that’s simply an array that keeps track of which expression was evaluated, and an running index that goes in circles around the array. This way we can track e.g. the 20 (configureable) most recently evaluated expressions, and when the crash happens we dump this trace into a file. We can then read the resulting and see, a-ha!, go was being evaluated! This can help us track down the source of the error more easily than just keeping track of everything that was evaluated, and can be very helpful for tools like PropR.

If were doing this from scratch, we’d have to annotate every single expression with a tick and figure out how to emit the correct code and handle all of it ourselves. Fortunately, the good folks over at Galois have already done most of the heavy work when implementing HPC, so all we need to to is to piggyback on top of their implementation.

To keep as much in line with HPC, we simply add two arrays, HpcTraceLabel to keep track of the data and a HpcTraceInfoLabel which contains two fields: the next index in HpcTraceLabel we want to update, and the size of the trace (so we can loop around when we’ve reached the end).

Of particular interest are the mkTraceBox and mkTraceBump functions that do the actual bumping and wrapping around of the index:

My go to program when implementing this was a simple “hello, world”:

Using the freshly-built GHC and running:

we get the expected "hello, world!" as output, but if we look at the .tix file:

We see that the trace is there! If we then look at the .mix file:

But what about our original purpose to find where errors occur? Let’s try it!

Here’s our error program from before:

Now, we run it with our improved trace, and get (as before) an error that just points out the consumer:

But if we look at the .tix file:

It works! We can see that it was evaluating the go function right before the error, with the last thing being evaluated being the empty list! A lot more useful to know the producer of the bad data than just knowing how many times each expression was evaluated, eh?

There is some weird behavior when running it multiple times: it will reload the old data before starting up, giving (for the ./hello case):

But this is consistent with HPCs continuously bumping the ticks (see the first part of the data).

All-in-all, implementing this feature was a fun experience, and gave me a few insights into how code generation and the RTS works in general. I hope there’s interest in adding this to mainline GHC, but it might be hard to sell. We’re modifying the runtime semantics when HPC is enabled, i.e. evaluating an expression now not only bumps the tick but also this list. But I know of a few actual use cases including fault-localization for PropR and other tools that need to know how things happened rather than just what happend.

The proof-of-concept works, but there’s some cleaning up to be done. I need to make the HPC libraries play nicely with the new data-structure, and there’s also some potential issues with multi-threading (but I think that holds for HPC as well). If you want to play around with it, have a look at the branch on GitHub. Enjoy!

After some wrangling with base, I’ve got it working with the default error messages! 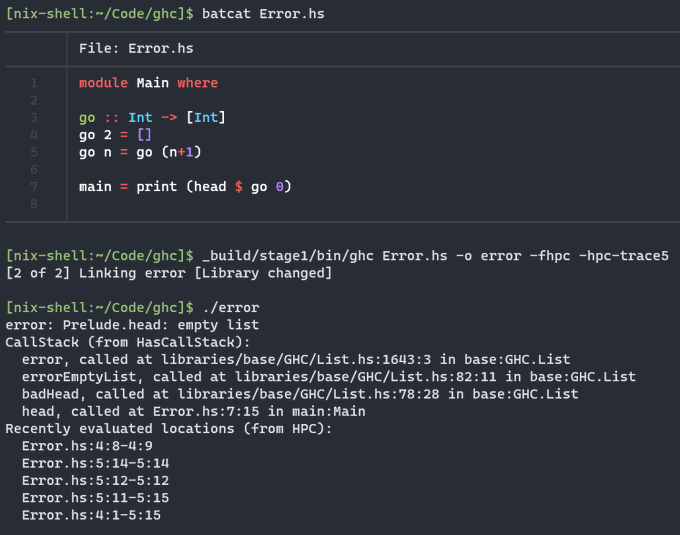 As you can see in the picture above, it now adds a Recently evaluated locations (from HPC) part that reads out the current internal HpcModuleInfo state and prints out the trace when an error occurs. This shows us that we were evaluating the [], 1, and n right before the crash, so we now know what case is causing the empty list. Pretty neat!

If you want to try it out you’ll need to do a fresh clone though, because the libraries/hpc is updated (or a git submodule update --init --recursive, if it works).